There is still a huge amount of uncertainty about the future of the outbreak and the economic impacts associated with it. The baseline forecast assumes that the current surge in the spread of the coronavirus is contained quickly and that there is no major resurgence in the fall. The forecast assumes that the executive order affecting activity at bars, indoor gyms, indoor movie theaters, and other activities, has expired.

Keep in mind that the projections may be subject to large revisions in the future as new information impacts the outlook.

Overall, Arizona is on pace to recover to pre-pandemic levels of economic activity in 2021, probably well before the nation as a whole. The long-run outlook for the state is strong. Once the pandemic is over, the state will once again consistently generate robust job, outlook, and population gains. Whether or not the state makes significant progress in closing the income gap with the U.S. will depend in large part on investments in education, as well as other drivers of innovation.

Nonfarm employment in the state bounced back during May and June, with over-the-month gains of 62,900 and 73,800, respectively.  Overall, that implies that Arizona has replaced 46.4% of the jobs lost from February to April. That was better than the 33.9% replacement rate for the nation through June.

Keep in mind that the nonfarm payroll employment data reflect the number of jobs on payrolls of establishments during the pay period including the 12th of the month. These data result from a survey of establishments and exclude agricultural workers and the self-employed.

The household survey, which generates the state unemployment rate estimate, includes agricultural workers and the self-employed, as well as other groups excluded from the establishment survey. These data did not paint such a rosy picture in June. The seasonally-adjusted unemployment rate bounced up to 10.0%, but remained below the national rate at 11.1%.

Across Arizona’s metropolitan areas, Sierra Vista-Douglas and Prescott have fared the best, with nonfarm jobs down just 1.4% and 1.5% from February to June. Tucson jobs were down 3.4%, while Phoenix jobs were down 5.7%. Yuma, Lake Havasu-Kingman, and Flagstaff were hit harder, with jobs down 7.1%, 9.0%, and 17.2%, respectively.

The short-term outlook for the state remains uncertain and dependent on the progress of the outbreak and scientific progress in generating effective therapeutics and a vaccine. The baseline forecast assumes that the current surge in the outbreak is contained quickly and that there is no major resurgence in the fall/winter. Under those assumptions, the state continues to recover gradually, with job, income, population, and sales growth continuing.

The state outlook also depends on the performance of the U.S. and global economies. The July 2020 forecast from IHS Markit underpins the state projections.

Consumer spending remains the epicenter of the downturn, with a drop of 5.8% this year, but business fixed investment, residential investment, and net exports decline significantly as well. Only government spending, excluding transfers, rises (slightly) in 2020.

The Federal Reserve is expected to keep interest rates near zero through 2026. Even so, high unemployment keeps inflation low.

Fiscal policy includes the actions to date, but no new major legislation was assumed in the July forecast.

These assumptions generate a continued gradual recovery in Arizona through the second half of 2020 and into 2021. The forecast calls for employment to return to its first quarter 2020 level by the second quarter of 2021. On an annual average basis, state job growth is forecast to hit 4.3% in 2021 (the rebound year) and then gradually decelerate to 1.8% by 2026.

Thanks in part to a massive infusion of funds through the CARES Act, Arizona personal income is forecast to rise by 3.1% this year. From March through August 8, unemployment insurance alone has injected $8.7 billion into the Arizona economy. That translated into 2.6% of Arizona’s total personal income last year. Income growth is forecast to slow to 2.8% next year, as the fiscal stimulus is replaced by organic income gains.

The Arizona long-run projections rely on the IHS Markit 30-year forecast generated in March 2020. These projections do not include any assumptions about the possible long-run impacts of the pandemic on the U.S. economy. At this point, possible long-term impacts are speculative at best. It is safe to say, however, that the more prevalent the virus becomes and the longer it takes to develop therapeutics and a vaccine, the larger and more extensive the long-term impact will be.

The 30-year forecasts call for job, income, and sales growth in Arizona to gradually decelerate, reflecting slowing population gains due to the aging of the baby boom generation. Even so, Arizona continues to far outpace growth at the national level. As Exhibit 1 shows, state job gains rebound strongly from the COVID-19 recession, then decelerate to just over 1.0% per year by 2050.

During the next 30 years, Arizona population is forecast to rise by 2.81 million, hitting 10.1 million by 2050. The state also adds 1.58 million jobs and $343 billion in real personal income during the forecast period.

Arizona’s job-population ratio rises during the next 30 years, reaching 44.1% by 2050. While Arizona makes progress during the forecast, the rate remains well below the nation, reflecting the state’s demographic mix.

Risks to the Outlook

The risks to the short-run outlook primarily revolve around the progress of the outbreak. Exhibit 2 shows the three scenarios for Arizona nonfarm jobs. 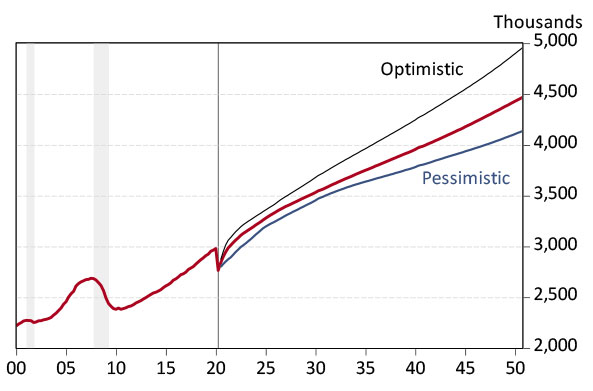 Employment recovers faster under the optimistic scenario, with jobs reaching their prior peak by the first quarter of 2021.

While it is difficult to foresee the long-run impacts of the pandemic on Arizona while we are in the middle of the crisis, we do know that the factors that drive long-run economic performance in our per capita standard of living will be innovation, physical capital, and public infrastructure.

Innovation is the main driver and it depends in part on investments in human capital, primarily education. Failure to invest in human capital accumulation will make it very difficult for the state to eliminate the income gap with the nation.

Similarly, the state needs to invest in public infrastructure, like highways and roads, water and sewer, telecommunications, airports, and border ports of entry, to ensure that the state is competitive around the U.S. and globally.

The state’s tax and regulatory structure also needs to be competitive so that investment in private physical capital, like office buildings, machinery, and equipment, is not deterred from locating in the state.

Water resources and other environmental concerns will also have an important influence on growth in coming decades. 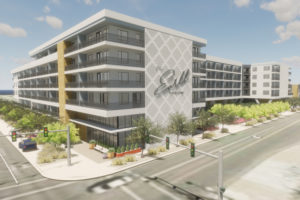 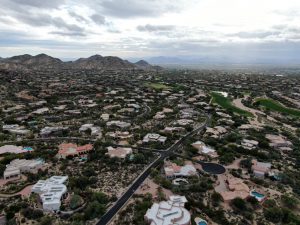 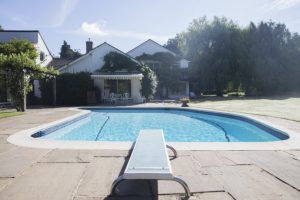 To Be or Not To Be? How to Handle Cutting Amenities During COVID-19 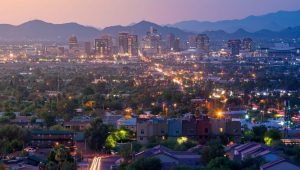